“WHERE HAVE I BEEN ALL MY LIFE? A MEMOIR” by ANNETTE ANDRÉ

For someone who has professed “terminal shyness,” Annette André has written her memoir with arresting honesty and generosity. From a lonely childhood in Sydney, Australia, and overcoming a chronic illness to become a professional ballet dancer, Where Have I Been All My Life? reveals the truth behind her storybook romance with a famous bullfighter, how Benny Hill proposed marriage, and why a chance conversation with Prince Charles helped to change the course of her life.Guest starring with Roger Moore in more of The Saint episodes than any other actress, Annette quickly became one of the most popular TV actors of Britain’s “Golden Age,” in such classic series as The Avengers, The Prisoner, The Persuaders! and her most memorable role of all, as Jeannie in Randall and Hopkirk (Deceased). From her fly–on–the–wall view of Burton and Taylor’s romance while filming Cleopatra to the perils of shooting A Funny Thing Happened On the Way to the Forum, and her appearances on the West End stage, Annette found writing the story of her life “excruciatingly hard work, but like a good orgasm, damn well worth the effort.

“Where Have I Been All My Life is the story of the life of one of British television’s most recognisable faces, and features a heartfelt foreword by Sir Roger Moore, and An Appreciation by Kenneth Cope.

“A crisply written autobiography which sparkles with anecdotal nuggets of literary gold throughout . The pace and overall delivery delivers from start to finish and leaves the reader with a wealth of perceptive and fascinating knowledge about the entertainment industry which provide the ingredients for an outstanding and informative text.
Bring on the sequel!”
Alex Lewczuk, Mid-Week Drive, Siren FM

“The beautiful actress Annette Andre has for me created the showbiz memoir of the year , sharp , wistful and yet told in such a brilliant easy manner you will return time and again -From Liz Taylor to Sir Roger Moore and Hollywood stars galore – It’s a life worth reading about and not just once!”
Neil Sean, Westminster Live

“Just finished Annette’s autobiography – lovely book. Well done to all involved – a delightful volume; you feel like you’ve just had a nice long chat with her!”
John Peel, author

“Where has my old friend Annette Andre been all her life? This delightful memoir tells us in honest, amusing, and often moving detail. A difficult childhood in Australia, a starry career in Europe, the highs, the lows, the loves and the love-nots — all are chronicled, no punches pulled, and all add up to a life in this beautifully written page-turner.”
Barry Creyton, Actor, playright, director.

“This book is interesting, giving behind the scenes looks at the world of show business and what it takes to make it. I love the laugh out loud moments as well as the thoughtful reflections on many parts of her journey.”
Raymond Austin, Director, Randall & Hopkirk (Deceased) 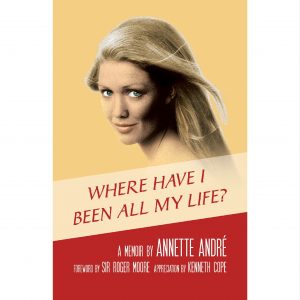